This was a title that came up through the Speedrun Every System Project, a project I'm undertaking where I roll a random system, pick a game, and speedrun it for every system that is feasible. Normally, with something like that, you're bound to draw a lot of trash (my rule is the game has to be original to that system) and you sincerely doubt whether or not you'll find any obscure system that has anything good on it. And then of course, as always, SNK comes to the rescue... 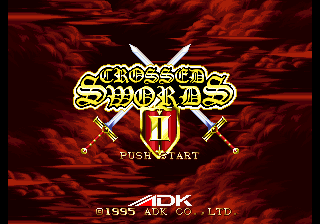 It has an arcade-style attract mode (despite being home-exclusive), like all good games

Crossed Swords II is an odd-little beat 'em up released by ADK Corporation on May 2, 1995 as the sequel to their arcade hit Crossed Swords (released in 1991). It is one of the very few Neo Geo CD exclusive titles; there's some others, like Zintrick, Ironclad (though that has modern ports now), Neo Geo CD Special, and ADK World, and a few other miscellaneous ports that despite other websites listing them I hesitate to call exclusive. 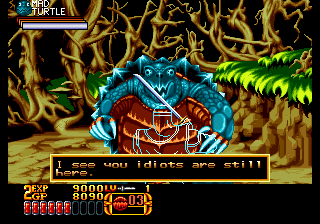 For those not familiar with its predecessor, the sequel is very similar in many ways. Instead of your typical belt-scroller, these games are played from an over-the-shoulder perspective with your character being represented by a wireframe. They operate on a two-plane system, with only enemies in the front being able to be hit by your weapon (enemies in the back can be hit by other means, but it's far and few between). There are desperation moves, which are very powerful or have special effects but cost you health to use. You also hold a limited number of magic spells, which are typically very powerful. 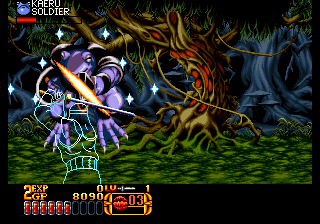 The combat is like no other, playing more like a fighting game than what you'd expect from a beat 'em up. By holding up or down, the player will block high or low. Correspondingly, each physical attack in the game is either a high or a low. By blocking correctly, the enemy will be stunned for a bit which makes them vulnerable to an attack. Of course, all this logic applies to you as well: enemies can block your attacks and counter! As well, you can't block non-physical attacks, like wizards zapping you with their kama. Each enemy has a clearly visible tell for what they're going to do, so it's a very tight test of reaction for most of them, but it's incredibly satisfying and rewarding to pull off a successful guard with a huge CLINK! 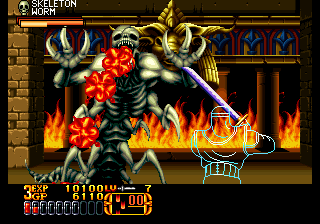 A shining example of the wonderful boss designs and beautiful spritework (this is a redesign of the first boss from the first game too!)

The story is exactly what you'd expect: In the great land of Belkana, the Demon Warlord Nausizz arose and sent his hordes of creatures to destroy the land. It's so predictable that what I wrote is actually a plot summary for both games! But of course, we're not here to play beat 'em ups for the story, now, are we? Don't worry about the game being all in Japanese; despite being a Japan-exclusive release, all the text is in English if played on an English Neo Geo CD, so this title is wonderfully import-friendly (as long as you shell out the cash for a Neo Geo CD in the first place)! 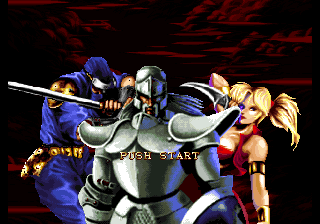 Our 3 unnamed heroes, complete with the obligatory ninja

Like the predecessor, this one introduces RPG mechanics: experience points can increase your level which slightly increases your damage output and max health, and you can spend gold collected at the end of an act to buy weapon upgrades, magic and health refills, level-ups, and new magic attacks. This one also expands upon its predecessor by adding a new 'movement' button: pressing left/right+B will allow for a short range dash, and pressing B in place will allow you to jump. The movement is incredibly fluid and makes the game control amazingly, allowing a new dimension to the already great combat. There's also 3 playable characters unlike the predecessor's 1, all with their own inherent strengths and weaknesses: the knight is slow but has excellent attack and defense, the ninja is well-balanced but lacks magic, the mage is speedy and has great magic ability but lacks damage. They're all welcome changes: the first game is fun, but simplistic. 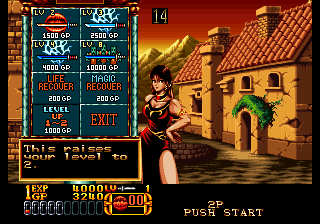 The wonderful shopkeeper. Where does she get all this stuff from?

There's some slight balance issues. I originally played through the game with the ninja because he looked the coolest, but when learning to speedrun this game I noticed the only previous runner used the mage. It turns out the mage's starting spell (the wave, as I call it) is completely broken and practically obliterates every boss up until about stage 5 or 6. I'm not talking about it just making the fights a bit easier, I mean it will literally stun-lock them to death if it even touches them. Later bosses will break the spell after getting hit once or twice. After that, there's one purchase-able spell that puts that one to shame, a full screen meteor shower that hits both rows, can strike enemies multiple times for huge damage, and cannot be broken. Pail Heads in particular have a long stun animation, which means you can stun-lock them with repeated jump attacks. Other than that it's actually fairly well-balanced and you'll feel yourself actually getting better at the game and the playstyle of the character you chose. The first game was praised for its audiovisual presentation, and its sequel is no slouch either. The sprites are HUGE, very expressive and well-animated. The enemy designs are a perfect mix of your typical fantasy designs (and obligatory ninjas) with some oddballs here and there. There are of course a few recolors, but the sprites are so well-done I honestly don't care. The sound effects are great (the massive CLINK! upon a successful block never gets old...), although the few music tracks there are are just kind of... there. They're okay, but nothing special. The main jingle is pretty nice, but it gets grating to hear on every loading screen in the game. 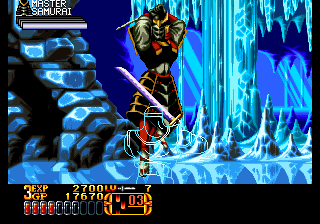 My personal favorite boss, the Master Samurai, who has one of the coolest boss intros of all-time

The game emulates flawlessly in MAME. If you're averse to trying to get Neo Geo CD emulation to work (my tip: load empty, then insert the CD from file manager), there is a cartridge hack to essentially turn this into a normal MVS/AES game released by Neobitz in 2015 (note to any arcade operators reading this, if you put this game in I will come to your arcade). I highly recommend it even just for a neat one-off. It's an amazingly fun game, and I can only assume even more fun in co-op! (update: I can confirm it is even more fun in co-op) If you'd like to see a speedrun, I ran this in the wonderful event Power Up With Pride 2021 (it was a PB too!).