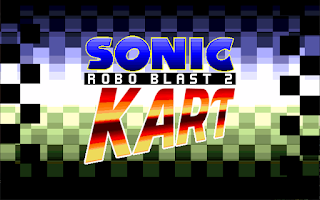 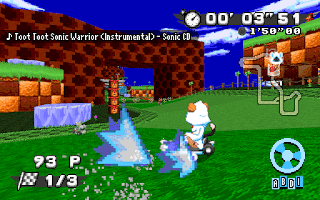 Are you really surprised that the first stage is Green Hills Zone? Taokaka by Deercat

I was introduced to this game by a friend of mine who hung around the student union at my university (the typical hang-out spot for FGC heads like me) who happened to be one of the devs on the project. It instantly became a huge hit for us and became a mainstay game that we still play occasionally, and for good reason. It's no secret that I've played a STUPID amount of Mario Kart Wii, and this game easily dethrones it as my favorite kart racer. 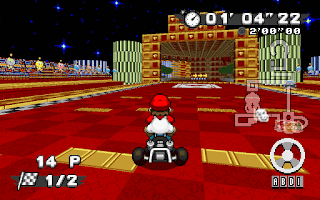 This pack includes DIC Mario who uses all the lines from the show (and whose character select portrait is the infamous 'Chinese cowboy' stomach ulcer pose). Mario & Luigi by mitsame

It's essentially your typical Mario Kart-like, except probably the highest-quality one out there. Controls are simple, with accelerate, brake, drift, and throw item. The drift functions like Mario Kart Wii and onward drift (no destroying your DS!) with 3 power levels, except that you are required to hold into the turn to gain sparks. The items are your typical Mario Kart items, but with a few twists (they're also way cooler looking), especially with the Self-Propelled Bomb (a.k.a. Blue Shell) allowing you to outrun it as long as you're racing perfectly. Rocket Sneakers (Golden Mushroom) run on a meter, so they require careful timing to get the most out of them as opposed to wildly mashing the item button. Hilariously, Bananas come in x1, x3, and x10 variants. Holding items behind you is balanced in this game by having you slow down after a bit, so they're not just cheap blocks against everything for free. 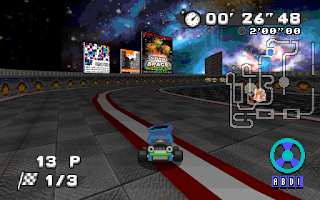 CHAO IN SPACE. Twinkle Cart also does what later Mario Karts started doing, where instead of 3 laps they would split tracks into 3 sections. Glover by Udgey

The controls are a bit more slide-y than Mario Kart, but in a good way, more like Double Dash's controls but actually good. Wii feels stiff and a bit too perfect in many ways, and Double Dash has you uncontrollably slide on anything other than 50CC, but this game strikes a very good in-between in general. If you prefer either, you can learn more towards one side via your character choice. You don't have the crazy air drifting control you have in those games either, which helps as the tracks have a lot of jumps and big air sections for spectacle. 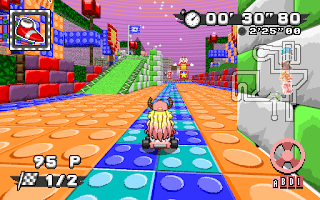 I included this because Ai no Supreme! has been in my head nonstop since the Miss Kobayashi's Dragon Maid S premiere. Lucoa by ThePinkGalaxy

There's a Battle mode as well, but honestly I haven't played it much because the racing is just so god damn fun that no one votes for it in multiplayer! Players out in Battle mode can come back in by taking out another player, and can drop item boxes that give powered up items. It's fun, but racing has always been more fun in these types of games. 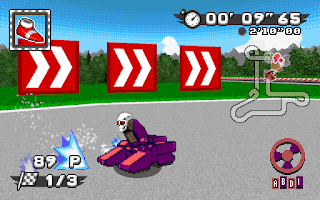 The characters in the game are balanced by two stats: speed and weight. Speed naturally gives you a higher top speed, but impacts your acceleration in turn. Higher weight reduces your drift control, but allows you to bump players a la Mario Kart. Both stats alter how quickly you gain drift sparks. All of these factors are neatly laid out in a graph on the character select screen. Just for funzies (and differentiating in multiplayer), you can change your character's color from a massive selection. 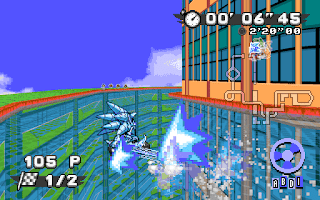 The courses, frankly, are gorgeous. They are immensely detailed; I noticed a ton of little things while taking screenshots for this article that I didn't even know about! They're colorful, inventive, and just plain fun to drive on. A lot of them are based on Sonic or other Sega properties (there's a Daytona and Persona map in the base set), and they all play great music from various games. Speaking of the music, although most of it are tracks from other games (a surprising amount of which not being Sega!), the other music in the game is excellent as well. 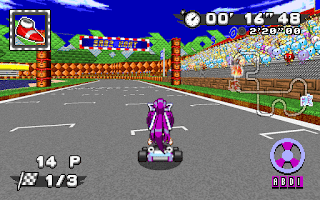 They're all animated too! Yuzuriha by Chengi

Of course, being in the DOOM engine means that the game is immensely customizable. In addition to new tracks, you can add a whole host of new characters! Some of these are included in the game (in bonuschars.kart, they're all from other Sega franchises) while you can freely download and add mod characters from the forums. There's WAY TOO MANY high quality characters on there; even the meme characters are usually good quality. There's a limit of 128 addons loaded, which you will easily hit in no time. They'll also automatically download when you connect to a server that has them. They're required to fit the main game's balance system unless they add custom scripts so don't worry, they won't suddenly be broken.

Default characters, Bonus characters, and my current modpack when I took these screenshots (which literally changed by the time I wrote this article an hour later)

There's no single player content in the game aside from Time Attack (with player and staff ghosts), so the only content you can really play is splitscreen or online multiplayer. There's no CPU players yet so that's about the best you can do. Racing both offline and online will help you unlock more courses. There's plenty of servers running, and it's not hard to run your own (I have a lot of difficulties with it for whatever reason but apparently that's just me) and get a few friends to play along with you. The game supports up to 16 players with 4 on a single machine (which can play online too!). I've never had a single issue with the online play, it runs incredibly well as long as you don't have terrible ping. 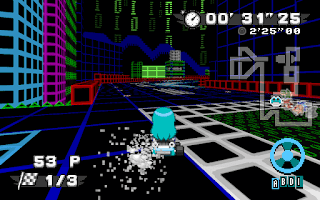 The game perfectly captures that Sonic feel and charm while not forgetting to be something of its own, a trap that a lot of other games fall into. If anyone asks me for freeware recommendations, this is easily at the top of my list every time. It's easily the most fun I've ever had playing a kart racer ever. 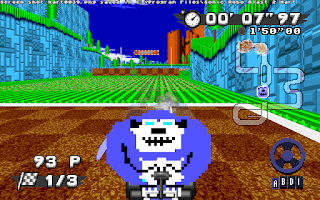 It took me this long to put a meme character in (unless you want to count Blitztank). Donkey Kong DOS by MechaDeka

You can get the game from the SRB2 message boards here. You can find the forum hub for addons in a nearby place here. (I recommend picking up the Moe Mansion mod in 'Custom Builds') 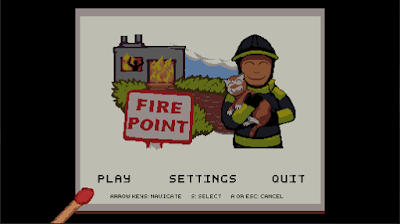 The title screen is a great representation of what can happen in the actual game.

Fire Point is a freeware puzzle-platformer by Cesque and Aeron released in 2013 about the perils of being a firefighter in a world filled with insane pyromaniacs and the worst fire safety imaginable. 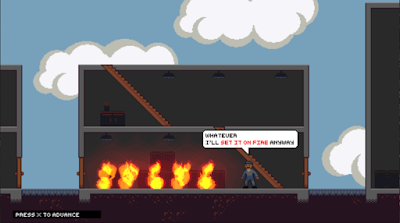 This game writes its own snarky captions!
You play as an unnamed firefighter trying to save people (and cats) from burning buildings and put out the flames in them. From the start of the level in your fire engine, you're equipped with a fire hose, which is very powerful but has a limited range due to the hose, and a ladder. There are a few items scattered among the levels: extra ladders, fire extinguishers, and fire axes. They're all used for puzzle-solving, either getting to new heights due to high windows or broken stairs, putting out flames, or breaking breakable doors down. You need to save a certain amount of people and escape yourself in order to clear the level. The fire slowly spreads on a fixed timer in the upper-left corner, and will burn anyone who touches it, including yourself. 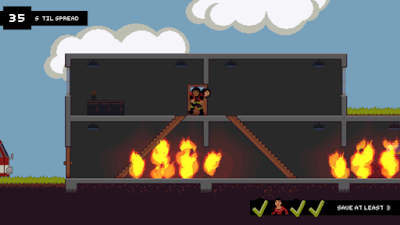 The game features 12 levels (plus a secret bonus level!) with a nice variety of puzzle-solving and tight platforming, being probably an hour total for the main game. Practically no level plays quite the same, especially with the hectic final level. You're not required to save everyone on every level, but it is doable and is usually faster anyway than waiting for the flames to slowly burn their way through. The controls are satisfactory, although trying to place ladders and throw people can be a little finnicky. You can only throw people when there's a certain amount of room in front and above you, and you never have enough room when you actually want to throw them through doors and windows and the throw distance is slightly too long to throw them into some gaps in the floor. Ladders flip around and land at whatever angle they end up resting at when falling, but you throw the ladder slightly in front of you instead of where you are. Climbing the stairs and ladders at least work better than you expect it to. It really only gets to be a problem on the bonus level which requires some insanely tight throws. The rest of the levels' puzzles are at least okay, although unless you're going for best time you can largely ignore them. 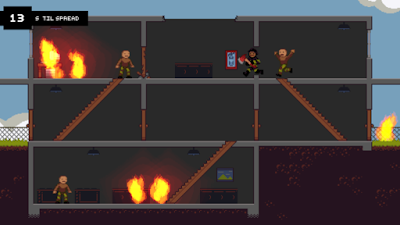 You will learn to hate the guys who automatically run back and forth like the guy on the right.
They're not particularly difficult puzzles nor is the platforming very difficult (sans the bonus level), but trying to save everyone can definitely get a bit tricky at times until you learn an actual route. There's a lot of ways to approach the levels, either being cautious and meticulously taking out all the flames, or going gung-ho grabbing and tossing people like everyone's favorite firefighter with a reckless disregard for life. I do have a small complaint with this though; one of the game mechanics is that people are supposed to escape if there is an open ground-floor escape route (one of the NPCs outright says it) but this almost never works in most of the levels, nor is it used. It's only really frustrating on the bonus level which requires a very awkward solution due to it, but it sure would be nice on the other levels too. The game keeps track of your clear times so you can try to beat your best on each level. 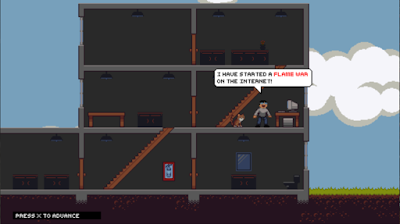 The graphics are charmingly simple; they do their job but they're nothing special. The music (all by Aeron) however, is absolutely fantastic. It screams freeware, but in a good way (my personal favorite being 'Puncher'). It's not reuploaded anywhere, but all the files are there in the game's folder readily available. 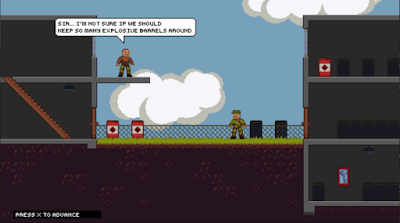 Of course, the absolutely absurd writing and story is great too. All the fires are started in the most ridiculous manners possible by people with less than zero knowledge of fire safety, megalomaniacal pyromaniacs, and sometimes just by physically impossible mechanisms too. 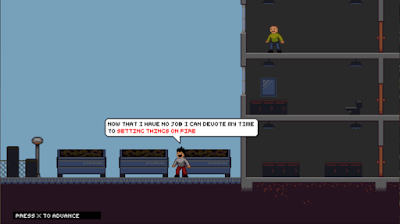 In all, I highly recommend anyone play through it; it's a very high-quality and fun game! The original download for the game is missing, so I took the liberty of hosting it on the Internet Archive.