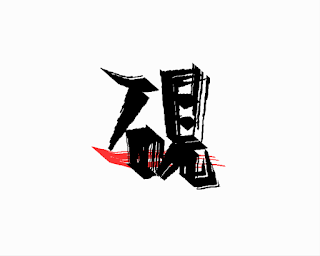 I got interested in this game after browsing Romhacking.net's translation section for PC games (I was probably browsing for Mystery Tournament submissions or something?) and saw this title, which immediately grabbed my eye because its genre was listed as "Other". I'd like to think I'm pretty good at distilling games into succinct yet detailed genre names, but I must admit there are even a few I would have to qualify as "Other" which automatically makes them interesting to me. The description by Non-Directional Translations describes it as a "paintbrush game" which is probably my new favorite name of a video game genre. 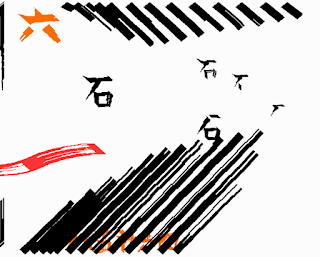 硯 (Suzuri, lit. 'inkstone') is an odd-little PC game released by ABA Games, a doujin circle who have made some excellent doujin shmups like Noiz2sa and rRootage, released for Windows 95 in 1998. The game is best-described as an 'avoid-em-up', basically like a shmup except that you can't shoot and there are no enemies, which makes the game sound a lot less fun than it actually is. 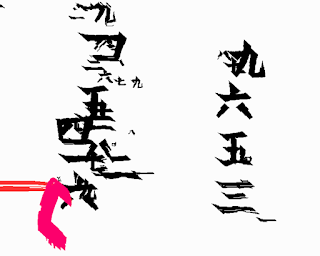 You play as a bright red-orange stroke of paint in their quest to avoid suddenly appearing kanji characters. There are two game modes: 素人 (novice, which I think is actually mispelled in game; it's missing one of the horizontal bars) and 玄人 (expert), which doesn't change the actual 10-level 'course' but makes your stoke move way faster. Your stroke's hitbox is not very obvious but it seems to be concentrated around the center of the stroke. Of course, this is pretty hard to tell when moving up and down but that's a lot of the challenge of the game. The stroke has a nice sense of momentum to it, which is definitely odd for a paintbrush but actually works to this game's benefit and it makes the dodges and maneuvering even more impressive and fun. 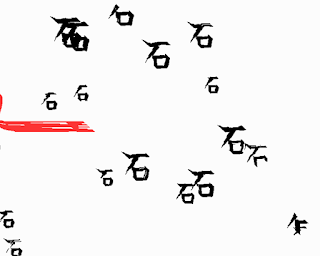 The game is surprisingly fun and addicting, one of those styles of games you'd expect to see on a cheap ad-filled mobile game nowadays but actually pretty good. It has that same feeling as making a very tight dodge in a shmup (and this game has a lot of tight dodges), and the whole game is short, sweet, and challenging enough to be interesting and very replayable. This wasn't this developer's first game as far as I can tell (they do have a few PC-98 games but none of their games are dated on the website) but I'm impressed they got that feeling right away. Maybe this game just appeals to my shmup-nut nature, but I think it's got some legitimate talent in it. 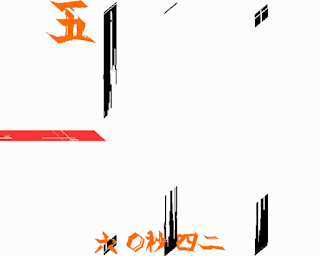 Of course, the real draw of the game is the visual style. The brush strokes are all well-animated (and most all of them are made in the correct order, which is a nice touch) and look very real. Even your stroke's motion at different speeds matches what would happen with a real brush. The entirety of the level is all classic-looking black strokes (aside from bright orange progress/time markers) which makes the visual effects very striking and oddly mesmerizing when moving at fast speeds. Whether flying through huge 山s or a sea of 人s or huge corridors, the game's look never gets old. Even seeing it in stills like this really doesn't do it justice. It's one of those visual styles you hope somebody on itch.io picks up and makes a neat game out of. 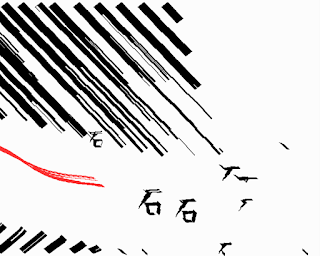 Trying to get this game to run was kind of a nightmare, albeit mostly of my own accord due to my ignorance of Windows 95/98 and emulation. PCem is an excellent way to emulate old IBM PCs and Windows machines, and thankfully there are excellent tutorials (I personally used this one) to install and get games to run. Trying to install the game was another story, as it took about 3 days and many hours between them trying to troubleshoot a nasty InstallShield error where every single post about it on the internet is about the same error caused by far more serious causes. After many reinstallations of Japanese Windows 98, many different methods of making a disc file for PCem, I found out that the reason I was getting this error was that the directory the installer was located in (my virtual floppy drive in PCem) was read-only. After moving all the disc's files to my desktop and installing without a hitch I was almost too mad to even play the game! I was happy I persevered though; it was a fun little experience for the short few minutes it takes. 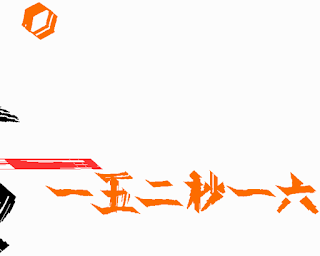 (note: this isn't actually my high score, just the only run I decided to take screenshots of because PCem's wonderful unrebindable screenshot key of Ctrl+Alt+PageUp doesn't make it easy even in a game like this that only required one hand)

Maybe it was just relief after the hell it was to get this to run, but I can recommend Suzuri if you're into short, weird, arcade-y Japanese titles and don't mind complicated emulator setup, especially if you're a huge shmup fan like me.

If you would like to play this game, it is freeware and available on ABA Games' website. An English translation is available on Romhacking.net courtesy of Non-Directional Translations here.