You might've though Games2Jolly would take the cake for weirdest games that have been featured here, but they get blown out of the water by this one: 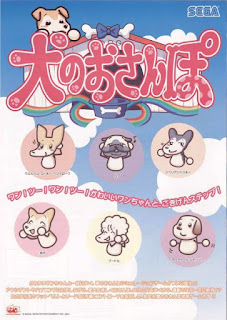 Arcade flyer: Text translates to "One! Two! One! Two! A happy walk with your cute dog!"

犬のおさんぽ (Inu no Osanpo, lit. 'walk the dog'), by WOW Entertainment (and supposedly CAVE, it's on their website) for the Sega NAOMI arcade platform in October 2001, is an arcade dog-walking simulator. Yes, really. 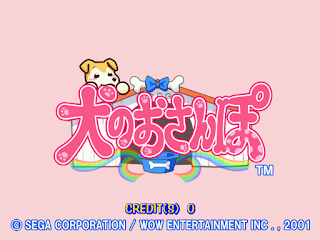 I played a lot of Nintendogs back when it first released and when I saw this game in the NAOMI games list and looked up a video I knew I had to play it. This was another high-effort-to-get-running game because the emulated controls are not exactly obvious (honestly I'm amazed Demul even supports them at all), and when I messaged the only person with a YouTube video as to how they got it working they couldn't remember anything special. Turns out there actually was nothing special, which will probably be a bit surprising in a few paragraphs! 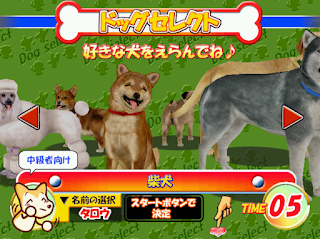 You choose one of 6 dog breeds (Shiba, pug, Siberian husky, Pembroke Welsh corgi, poodle, Labrador retriever; they all have cute names too) and one of three routes and go on a lovely little walk with your dog. You can go to the pet store to get more food, walk to a field so you can play with a frisbee, or make your way home from the dog park. 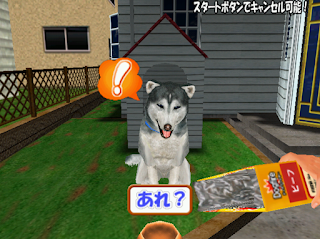 But of course, this is an arcade game! It can't be as simple and mundane as that! First, just look at the "controller" for this game: 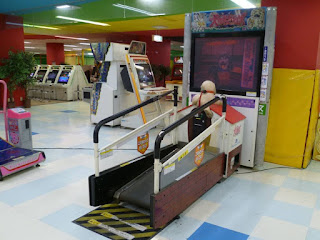 If I ever get to open my 'I won the lottery and have way too much money' arcade, you can bet I'll have this cabinet in there.

Yes, it's a treadmill. A treadmill, a fake plastic dog, and a lead. It might be the most bizarre control scheme I have ever seen for a game. When playing on emulator the control scheme might actually be even more of a mess, because the treadmill is bound to mouse movement. (and moving it even an inch before starting the game will simulate treadmill movement and will cause a BELT ERROR, complete with an annoying alarm and warning screen that only goes away by going to test mode and clearing it) 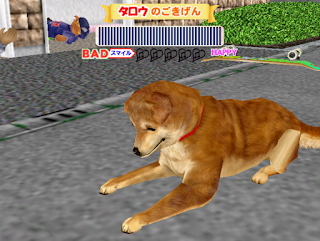 We failed to dodge the skaters; you can see one of them wiped out in the back

The game's not very pretty; it looks like a very early Dreamcast game which is disappointing for arcade stuff at the time (though everything looks disappointing compared to Planet Harriers, which was one year earlier). The music is okay and cute. There's nothing special about either: this isn't exactly the kind of game you'd play for the cutting-edge graphics, now is it? 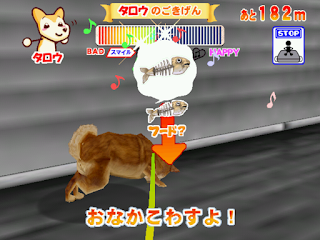 Don't let your dog eat garbage in the road!

As expected with an arcade game, you are graded and scored based on your dog's mood meter. Successfully walking it, letting it investigate where other dogs have done their business, and completing in-level missions will raise it and cause your dog to prance around hilariously. Outrunning or moving too slow for your dog, letting it eat trash, or failing missions will lower it. Lowering it all the way will give you a GAME OVER, and your dog will be very sad. 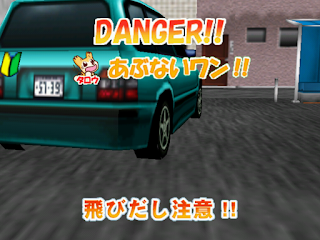 The missions are really the highlight of the game: middle-aged women trying to catch a cat who stole their fish, getting attacked by crows, avoiding cars or bikes in the middle of the road, or even a series of 'fights' against a particularly mean bulldog, and that's not even listing the most ridiculous one of all. They're pretty outlandish and feature some funny animations, win or lose. They're also not too hard once you figure them out (except frisbee, I still can't manage to do that one at all). 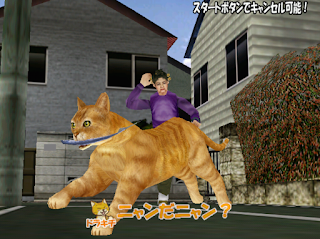 It's honestly pretty fun, and worth it just to see how weird it is. Given that it's an arcade game, it's very short, probably 15 minutes for the longest route at the most. It's something that I can recommend at least playing through each of the routes once, you will probably laugh your ass off at least once in each. And of course, if by some fortuitous chance you actually see this in an arcade somewhere, you better play it.